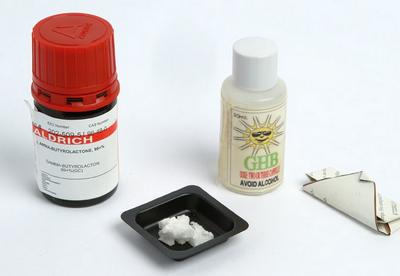 'Fantasy' is the common name for Gamma-hydroxybutyric acid (GHB) and its related substances including:

These substances have similar chemical structures and effects on humans.

It has also been used therapeutically in some European countries and the United States for treatment of alcohol and opiate dependence. It is also an anesthetic.

GHB and its related substances are also being used as 'recreational drugs' for their relaxant and euphoric effects. These substances are commonly used as dance party drugs.

GHB and its related substances are most commonly available in a liquid form and are taken orally. They are colourless, odourless liquids usually sold in small bottles or sachets. It has also been seen in powder and capsule form.

What are the effects of Fantasy?

'Fantasy' is a depressant drug, which depresses the central nervous system. Small doses can have a relaxant effect, reduce social inhibitions, and can produce short-term amnesia and hypotonia (diminished skeletal muscle tone).

Medium doses can produce drowsiness and sleep for some people.

This is a 'rule of thumb' guide only because the same dose can affect different people in different ways - for example, a euphoric dose for one person could sedate another person.

What are some of the key risks?

Over the years in New Zealand , there have been an increasing number of people admitted to accident and emergency departments who have had life threatening overdoses of Fantasy. Around 226 deaths have been attributed to the drug. Particular risks for these substances include:

The very fine line between the dose required to give the 'desired effect' and that causing an overdose, which may result in coma, convulsions, vomiting, blocked airways, the person stopping breathing, and death.

The onset of the effects is delayed (around 10-20 minutes), which may cause people to consume more of the drug, thinking the original dose was not enough. This may lead to an overdose. Effects can last anywhere between 1-6 hours, or more depending on the dosage.

The unpredictability of the effects - especially when combined with other substances like alcohol. Likewise, some GHB-related substances (such as GBL) may be more potent than others.

There have been reports of people becoming dependent on these substances if they are taken at regular, high doses, over a long period of time.

These substances have been implicated in drug-assisted sexual assaults

The effects discussed above are largely short-term effects from one drug taking session. There is little information on the long-term effects of these substances when taken for many months or years

How can the potential harm from dance party drugs be minimised?

The Ministry of Health's Dance Party Guidelines pamphlet and associated resource, has some good harm minimisation advice about dance party drugs for those who choose to take them regardless of the law.

All drugs have the potential to cause harm. The safest option is not to take illegal drugs.

If you choose to use drugs, be prepared and be aware of the risks.

Drugs can affect you differently depending on the drug's contents, your mood, and the situation.

The Guidelines give important information about staying safe, being prepared, and the risks of dance party drugs. The Guidelines are available on the National Drug Policy Website (http://www.ndp.govt.nz/), the Ministry of Health, or authorised providers in each District Health Board.

How can the potential harm from Fantasy be minimised?

Because of the delayed effect and small difference between a dose that gives the desired effect and a potentially fatal overdose, people choosing to take these substances should only take a small amount and wait for it to take effect.

Using the same drug again may affect you differently. It is often impossible to know just what is in the drug you are taking. There is some evidence that GHB and its related substances (eg, GBL) have different potencies and so there is a risk of overdose.

If a person is unconscious after taking these substances you should seek medical help immediately. Dial 111. Do not leave the person alone. You should care for them by safeguarding their airway, positioning them in the 'recovery position', and administering 'mouth-to-mouth' breathing if the person has stopped breathing.

People should never be left to 'sleep overdoses off'. Overdoses of these drugs can result in people stopping breathing and dieing. Although some people do recover spontaneously, you should call for immediate medical assistance if a person is unconscious.

People who have taken the drug should not engage in risky activities requiring concentration and physical coordination such as driving a vehicle, operating heavy machinery or engaging in water-related activities.

People should not take these substances alone, or with strangers.

People should not take drinks from strangers, or leave their glasses unattended because someone might 'spike' their drink.

Do not take other substances (eg, alcohol) at the same time as the effects can be unpredictable. There is evidence that alcohol compounds the effects of GHB as they are both depressants.